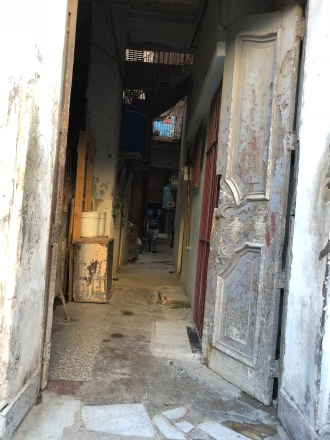 (This is part of the Jersey City in Havana Series, multimedia stories produced by St. Peter’s students who spent Spring Break in Cuba.)

By Jonathan Veintimilla, Class of 2020

Travelers exalt the island’s beauty while warning of the lack of technology and toilet paper, but not many people speak of the deterioration crisis.  No advice or description can really prepare you for the true wake-up call that Cuba is. No picture can really reveal the true state of the city. Havana is trapped in time and its people wear it well.

It’s truly humbling to witness families living on 20 CUC’s a month (which is the equivalent to 20 bologna sandwiches and a refresco) and a hole in their ceiling walking around with a smile on their face. Though these people may not have much, they adore foreigners from the very country that shuns them.

Most Cubans live in 1950 style homes and apartments. Most buildings would never pass an American safety inspection, the architecture is impressive but needs extreme amounts of repair. Cuba is legitimately falling apart. A few blocks outside of the tourist areas,homes are legitimately not safe to live in. It’s sad to see such a friendly people forced to live in shambles because of corruption and the sheer lack of funds.

In my interview with Benito Perez, a professor teaching at Havana’s university, he said the situation is dire for many families. Families live with gaping holes in their ceilings and plumbing from the 1950s. Due to the age of the structure, ceilings tend to collapse and with a government paying you the equivalent of 20 bologna sandwiches a month, a new roof is basically a fantasy.

According to Venito, “The Cuban government can only afford to invest in restorations that will return profit”.

These families in need are forced to adapt and I believe that’s what’s truly inspiring about Cubans versatility. They fight against time, stabilizing their collapsing home day by day.

A strong example of Cuban versatility is Fabrica De Arte Cubano. In our tour with the galleries director, we learned the gallery was solely restored by the local painters who lease the property from the government. Havana artists partially restored the building from ruin and turned it into a lucrative business that funds starving artists and even local children.  A gallery by day, and club by night for both locals and visitors to come and be inspired and occasionally have one too many cervezas.

Some of better housing I saw dwell at the bottom of Cuba’s mountain ranges. Vinale’s homes appear to be much better off than other areas. The majority of homes in Cuba’s western parts are small shacks, covered with large metal sheets. The shacks are newer and much easier to live in compared to Havana. According to Professor Alex Trillo, one of our program’s co-facilitators,  “tourism is growing in Vinales, a lot of homes and rooms are converted to vacation rentals.”

In addition to the restoration crisis, Cuba’s infrastructure is crumbling. Most highways and streets are in dire need of safety improvements.Cuba’s need for change seems to have no end in sight. You may think that Cuban’s prayers may be answered by future American cooperation, but according to Benito, “It may put money in the pockets of Cubans or make items and material accessible, but realistically the government’s infrastructure is broken. Cuba and its restoration may never see an end until the government undergoes serious financial reformation” and until then Havana will stay frozen in time, slowly crumbling.