By: Jaida Johnson and Aaliyah Atkins, Class of 2019

We visited a few popular places, both old and new,  around Mcginley Square. One never realize how much is actually in your neighborhood, from McGinley Square Pub, Wonder Bagel, Lee Sims Chocolate Shop, and One Spot For All Jersey City it seems there is a lot going on in McGinley Square.

The cafe One Spot For All is fairly new located on 757 Montgomery St, Jersey City. Everything in the place is one dollar, how neat is that! There’s a nice positive vibe in the shop itself, and the employees as well as the owner are very friendly. Even though they have only been open for a month the owner says it’s slow but he’s starting to see a steady pattern in the clientele. 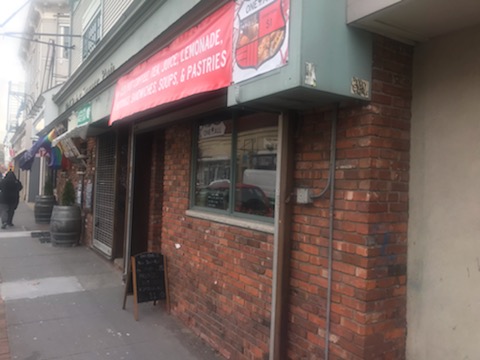 “This is a place you can come and get a lunch for just three dollars, you get a grilled cheese, a tomato soup, and a drink, or a hot dog, a tea, and a muffin it’s a great deal,” says Demetrius the owner.

He didn’t have a problem with sitting down and talking one on one about his new business and how it’s going thus far. He also offered me a coffee, and said it was very good so I couldn’t say no to that.

Along with everything being a dollar Demetrius states that they also try to keep things healthy as well. They have eight different kinds of organic tea for the public.

He couldn’t say much about a change or how gentrification has expanded because he’s only been here for four months, but he did mention that he hopes to add some more items on their dollar menu such as meatballs and pasta.

Another thriving business in Mcginley Square is Wonder Bagel located on 729 Bergen Avenue, Jersey City. This establishment has been up and running for almost four years. The owner states that he gets a lot of Saint Peter’s University students that come on a weekly basis for breakfast or for lunch. I found it very interesting that a lot of their customers are of the Saint Peters Community.

The owner whose name wished to not be disclosed states that they wouldn’t mind being more involved with the SPU community with giving back. He states that he is very giving when it comes to donations pertaining to bagels, and pastries but only a certain limit. 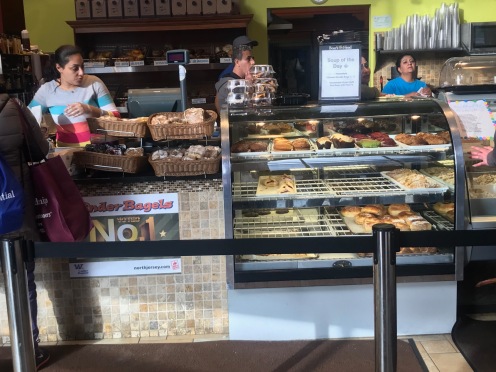 There are six different locations of Wonder Bagel in Jersey City! Wonder Bagel is growing and evolving from breakfast food to even lunch, their business is thriving !

From just visiting two places you can see that Jersey City is evolving. Now lets take a look at what Aaliyah was able to find.

The weekend is here, you and a couple friends need somewhere to hang out casually for the night. Instead of going to Hoboken or the city, why not stay local and head out to Mcginley Square Pub?! It is footsteps away from Saint Peter’s University and they have deals specifically for us.

The bartender, Victoria whom has been employed by the bar for 2 ½ months has noticed so many changes in just that short amount of time.

“Honestly, I think they’re always building around the area. There’s always people moving in, the community is expanding.”

The McGinley Square Pub was closed down three years ago after being at the location for many years, it was at the time when they closed that the now owner Angelo brought the building and re-lit Jersey City’s nightlife.

If you’re ever in the mood to unwind during your lunch break from class or work, ‘The Pub’ offers so many great deals! “For lunch and dinner we have burger-beer-shot for $10. From open until 7PM everyday.” Says Victoria.

For Saint Peter’s at all times if they have their student or faculty ID, it’s $10 pitchers which are normally $20. They also host Beat the Clock on Tuesdays, drafts are $1 and they go up every hour starting at 8PM as well as the house shots.

You have to take advantage of these unmatched deals, especially for college students. The Pub is always looking to interact with us and if you are a college student who is also a bartender and can work a couple days out the week, The Pub is looking for you! Resumes can be submitted through Craigslist.

“The boss is always trying to expand to you guys. We do have a deal here for an open bar – if you bring a couple of friends and wanna hold an event here, it would be just $20 per person for all of the draft beers and house liquor for two hours.”

You know the saying, “life is like a box of chocolates, you never know what you’re gonna get”? In this instance, Lee Sims is the box of chocolate. Filled with such a variety of chocolate desserts for over 70 years this company has made its name known throughout McGinley Square.

With a long-standing business such as Lee Sims, employee of seven years Jocelyn has not noticed many gentrified changes surrounding the business.

“I can’t really tell the changes, for me it’s pretty much the same. The demographics have changed, it seems that there is a lot of new people. Businesses and a lot of more professionals in the area.”

Lee Sims sees more Saint Peter’s faculty rather than the students. Jocelyn says on a weekly average, they get faculty customers everyday. As opposed to the students only four or five times a week.

“Yeah that would be good! To see Saint Peter’s more involved with the community or have publicized events.”